Have You Ever Seen A Canola Tree?? 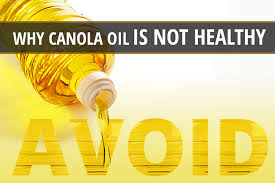 Well, have you ever seen a canola tree?? Nope... there is no such tree. Unfortunately, there is still much confusion about canola oil and whether or not it is considered one of the "healthy" oils. Hopefully this blog will help to clear up some of the confusion...

If you stop and think about it, we know of course that olive oil comes from olives, coconut oil comes from coconuts, avocado oil comes from avocados and so on. But, canola oil does NOT come from the canola tree because there is no such tree or plant. Canola oil is a manufactured oil.

Canola oil was first created in the early 1970's as a natural oil, but in 1995, Monsanto created a genetically modified version of canola oil. Canola oil is cheap to manufacture and many packaged and processed foods contain it. The name "Canola Oil" actually stands for "Canadian Oil Low Acid" since it originated in Canada and no one would buy a product called Rapeseed Oil which is what canola oil is actually made from - the rapeseed plant, which is part of the mustard family.

Rapeseed oil works very well as an industrial oil, NOT a food. It has been used in things like lipstick, candles, soaps, biofuels and even insecticides. But once the powers that be figured out that it could genetically modify rapeseed oil, it began being sold as an edible product that is low in saturated fats and rich with Omega-3 fatty acids. But this oil was actually never made for human consumption!

By the late 1990's, canola oil use had soared. Unfortunately, the truth about the manufacturing process was not talked about. Canola oil goes through such a manufacturing process that it becomes something far removed from the original plant source. After much mechanical processing and high temperatures and solvents, the plant seeds are refined, bleached, de-gummed and who knows what else in the processing... In addition, because the Omega-3 and Omega-6 fatty acids become rancid and foul smelling when exposed to high heats, the canola oil must also be deodorized. This process of deodorization creates trans fatty acids. There are NO healthy trans fats. Trans fatty acids are linked to heart disease and stroke, they raise your LDL (bad) cholesterol levels and lower your HDL (good) cholesterol levels.

Bottom line? Canola oil is a manufactured oil that is NOT a natural oil. You would be far better off with a cold-pressed organic olive oil or coconut oil. Hope this helps to clear up some of the misunderstanding...

That's it for now - unti next time,

Here's to the road that lies ahead - Here's to YOU!