What's Really In Your Mac & Cheese??! 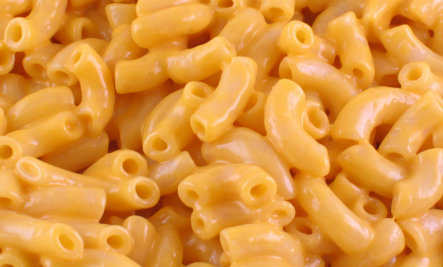 You might be surprised by some of the foods and additives that are being sold to us here in America, but banned in other countries... I think it's important to be aware of what's going on, and that way at least you know the truth and can make some healthier choices! Dr. Mercola recently wrote about all of this and I wanted to share some of what he wrote with you...

The 10 Foods Sold In The U.S. But Are Banned Elsewhere

Farm-raised fish is usually fed an unnatural diet of genetically engineered grains, antibiotics and chemicals unsafe for humans. To mask their grayish flesh, they are given toxic and potentially eye-sight damaging synthetic astaxanthin. To determine farm-raised from wild caught (most restaurants serve farm-raised unless the menu states wild-caught), wild sockeye gets its red color from natural astaxanthin and carotenoids. The white "fat strips" are thin, meaning it's lean. Farmed salmon has wide "fat strips" and its color is pale pink. Look for Alaskan or sockeye when shopping or ordering fish at a restaurant. They are illegal to farm.  Where these farm-raised salmon are banned: Australia and New Zealand

Most Hawaiian papaya is genetically engineered to be resistant to the ringspot virus. Where these are banned: The European Union

About 45% of US pigs, 30% of cattle and an unknown percentage of turkeys, are plumped with the asthma drug ractopamine. This drug can damage the human cardiovascular system, and may cause hyperactivity, chromosomal abnormalities and behavioral changes. Where it's banned: 160 countries across Europe, Russia, mainland China and Republic of China (Taiwan).

Boxed Mac & Cheese, cheddar flavored crackers, Jello-O and many kids' cereals contain red 40, yellow 5, yellow 6 and/or blue 2. The Center for Science in the Public Interest reports that some dyes are also contaminated with "known carcinogens." Red 40 and yellow 6 are also suspected of causing an allergy-like hypersensitivity reaction in children. In countries where these food dyes are banned, companies like Kraft employ natural colorants like paprika extract and beetroot. Where it's banned: Norway and Austria. Britain advised companies against using food dyes by the end of 2009. The European Union requires a warning notice on most foods containing dyes.

Bread, hamburger and hotdog buns, are enriched with potassium bromate, or bromide, linked to kidney and nervous system damage, thyroid problems, gastrointestinal discomfort and cancer. Where it's banned: Canada, China and the European Union.

Olestra or Olean, created by Proctor and Gamble, is a calorie and cholesterol-free fat substitute in fat-free snacks like chips. It intereferes with the absorption of fat soluble vitamins such as A,D,E, and K and that's why the FDA requires that these vitamins be added to any product made with Olean or Olestra. Time Magazine named it one of the worst 50 inventions ever. Where it's banned: The UK and Canada

BHA (butylated hydroxyanisole) and BHT (butylated hydroxytoluene) are common preservatives in foods like cereals, chewing gum, beer, and meat. The National Toxicology Program's 2011Report on Carcinogens says BHA may trigger allergic reactions and hyperactivity and is "reasonably anticipated to be a human carcinogen." Where it's banned: Both are banned in parts of the European Union and Japan; The UK doesn't allow BHA in infant foods.

10. Milk And Dairy Products Made With rBGH

Recombinant bovine growth hormone (rBGH), a synthetic version of natural bovine hormone is injected into cows to increase milk production. Monsanto developed it from genetically engineered E. coli bacteria, marketed as "Posilac."  It is banned in at least 30 other nations because it can increase cancer risks. Pay attention to labels when buying dairy products and look for products labelled "rBGH free or "No rBGH." Where it's banned: Austraila, New Zealand, Israel, European Union and Canada.

So, what's the bottom line here??? Be aware, read your labels and do the best you can to make healthy choices. Buy organic whenever possible. Look for labels that say "Non GMO." Avoid products that are "enriched." If you are buying something with a laundry list of ingredients that you can't pronounce or recognize, it's probably not too good for you. Keep it simple and eat fresh, whole foods that are healthy and not processed whenever possible.

That's it for now... Until next time,