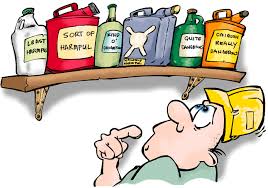 It seems that more and more you might need a degree in chemistry to understand some of the ingredients in our foods...

There is a saying out there that says: "If it comes from a plant, eat it. If it's made in a plant, don't."

The organizations that are responsible for being our watchdogs and keeping us safe, are not exactly up to the task. The FDA's shortcomings are often tied in with The Food Additives Amendment of 1958. This amendment is responsible for launching the designation Generally Recognized As Safe (GRAS), which has definitely muddied the waters. According to the FDA, if an additive is "generally recognized, among qualified experts, as having been shown to be safe," then it will not be subject to any further testing. But WHO ARE THE EXPERTS?? According to data analyzed by researchers from the Journal of the American Medical Association, none of the safety assessments were analyzed by objective third parties. More than 20% of the tests were carried out by the companies who manufactured the food additives in the first place!

The FDA's definition of a food additive: "Any substance that is reasonably expected to become a component of food." HUH? Well, that certainly defines things doesn't it?! The food additive industry, which is reported to be worth $36.1 billion by 2018, seems likely to find some loopholes here. In my opinion, (and actually not just my opinion), let's just say that relying on The FDA or GRAS to fully protect us from some potentially harmful chemicals, might not be in our best interests. So, please read your labels!

I think it's important to know what additives are in our food...

The 12 Most Hazardous Food Additives From The Environmental Working Group (EWG):

Nitrates and Nitrites - Primarily used to preserve flavor and color in cured meats, products treated with nitrates and nitrites are a breeding ground for nitrosamines, a known cancer-causing compound.

Potassium bromate -Used to fortify bread and other foods made from wheat flour, this additive is more poignantly recognized as a carcinogen by both the state of California and the International Cancer Agency.

Propylparaben - A common preservative in tortillas and muffins, it has also been linked with decreased sperm count and testosterone levels in lab rats.

Butylated hydroxytoluene (BHT) - Often used in concert with BHA as a preservative in convenience foods, it has been associated with the development of lung and liver cancer in lab rats.

Propyl gallate - This chemical is used to preserve edible fats in sausage and lard and also has links to estrogenic activity and endocrine disruption.

Theobromine - An alkaloid found in chocolate, this additive used in breads, cereals, and sport drinks is deemed safe by the FDA—but only at a level 5 times less than the average person consumes it.

Artificial colors - Food dyes are typically used to increase the visual appeal of nutrient-deficient food. Caramel color III and IV contain a chemical that was linked to tumors in a National Toxicology Program study.

Diacetyl - Used as butter flavoring in microwavable popcorn, this compound is associated with severe respiratory diseases.

Phosphates - Found in more than 20,000 foods, this is the most common additive. High phosphate levels in the blood lead to an increased risk of cardiovascular disease.

Aluminum additives - Used as a stabilizer in many processed foods, it is linked with developmental difficulties during pregnancy as well as neurodegenerative disorders.

The bottom line here?? It always comes down to power of the people. If we speak out, we can create positive changes. Already we are seeing chemicals and additives being removed from foods because enough people demanded a change. Yoga mat materials were removed from bread at Subway and beetles are no longer used to color certain drinks at Starbucks. So, speak out! Use your voice... You matter!

Super helpful. Really like the details on the various additives.